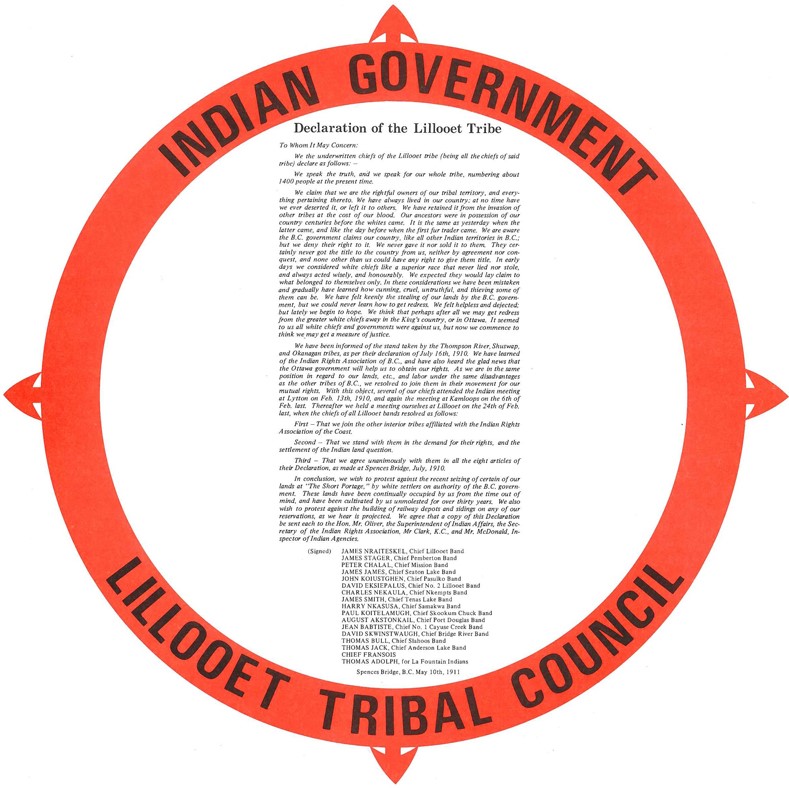 We the underwritten chiefs of the Lillooet tribe (Being all the chiefs of said tribe) declare as Follows: We speak the truth, and we speak for the whole tribe, numbering about 1400 people at the present time.

We claim that we are the rightful owners of our tribal territory, and everything pertaining there to. We have always lived in our country; at no time have we ever deserted it, or left it to others. We have retained it from the invasion of other tribes at the cost of our blood. Our ancestors were in possession of country centuries before the whites came. It is the same as yesterday when the latter came, and like the day before when the first fur trader came. We are aware the B.C. government claims our country, like all other Indian territories of B.C.; But we deny their right to it. We never gave it or sold it to them. They certainly never got the title to the country from us, neither by agreement nor conquest, and none other that us could have any right to give them title. In early days we considered white chiefs like a superior race that never lied nor stole and always acted wisely and honorably. We expected they would lay claim to what belonged to themselves only. In these considerations we have been mistaken, and gradually have learned how cunning, cruel, untruthful, and thieving some of them can be. We have felt keenly the stealing of our lands by the B.C. government, but we could never learn how to get redress. We felt helpless and dejected; but lately we begin to hope. We think that perhaps after all we may get redress from the greater white chiefs away in the King’s country, or in Ottawa. It seemed to us all white chiefs and governments were against us. But now we commence to think we may get a measure of justice.

We have been informed of the stand taken by the Thompson River, Shuswap, and Okanagan tribes as per their declaration of July 16th 1910. We have learned of the Indian Rights association of B.C. and have also heard the glad news that the Ottawa government will help us to obtain our rights. As we are in the same position in regard to our lands, etc. and labor under the dame disadvantages as the other tribes of B.C., we resolved to join with them in their movement for our mutual rights. With the object, several of our chiefs attended the Indian meeting in Lyton on Feb. 13th, 1910, and again the meeting at Kamloops on the 6th Feb. last, when the chief of the Lillooet bands resolve as follows:

Second- That we stand with them in the demand for their rights, and the settlement of the Indian Land question.

Third- That we agree unanimously with them in all the eight articles of their Declaration as made in Spences Bridge. July 1910.

In conclusion, we wish to protest against the recent seizing of certain of our land at “The short Portage,” by white settlers on authority of the B.C. government. These lands have been continually occupied by us from time out of mind, and have been cultivated by us unmolested for over thirty years. We also wish to protest against the building of railway depots and sidings on any of our reservations, as we heard is projected. We agree that a copy of this Declaration be sent to the Hon. Mr. Oliver, the superintendent of Indian Affairs, the secretary of the Indian rights association, Mr. Clark, K.C., and Mr. McDonald, inspector of Indian agencies. 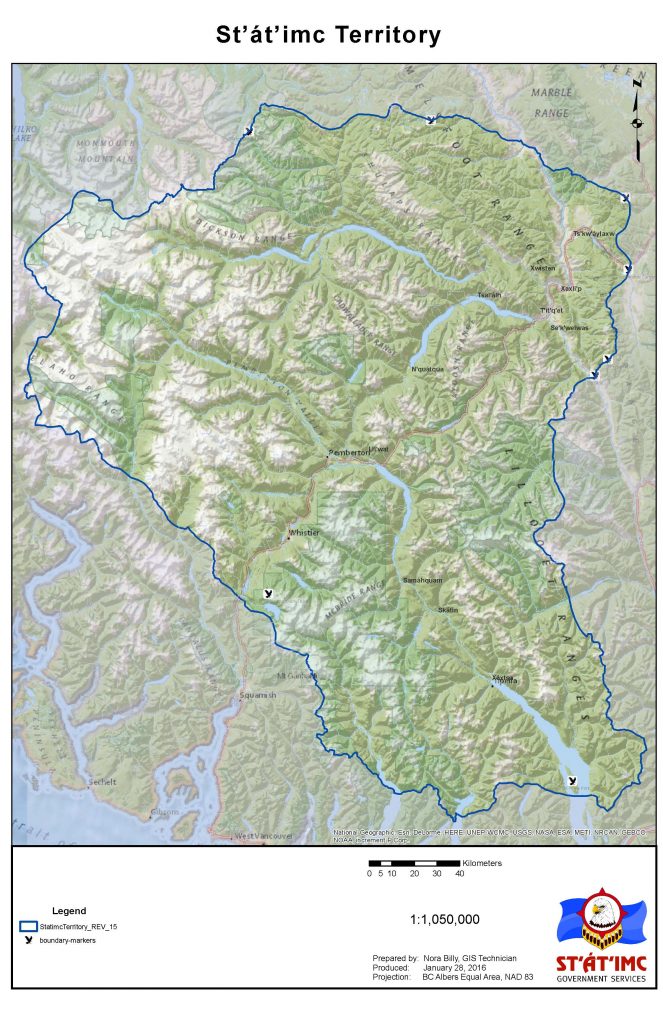